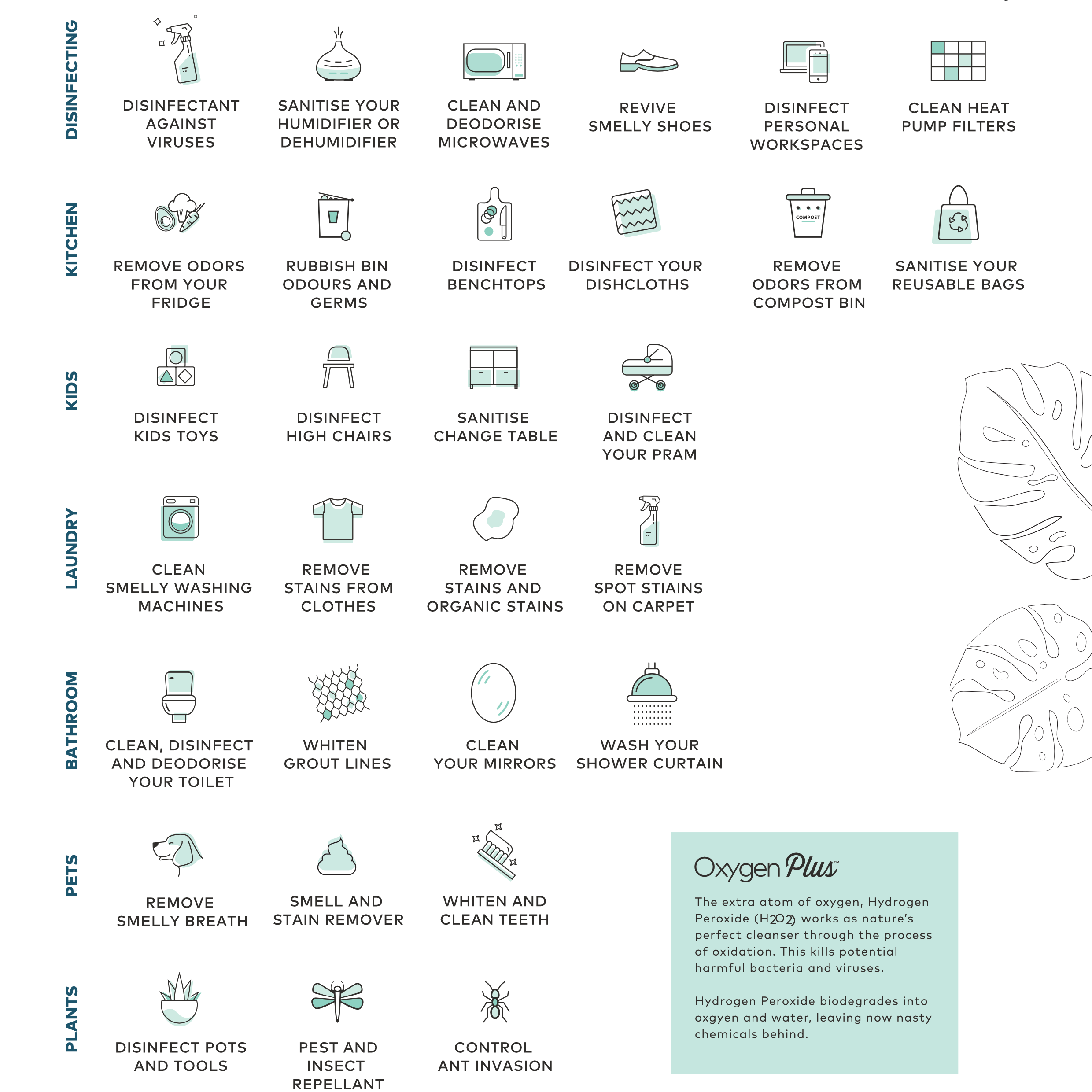 Eliminate the need to buy multiple and expensive cleaning, garden and personal care products. Save money and cabinet space!

One solution that does so much more than just disinfect your benchtops. Oxygen PlusTM not only disinfects just about any surface but also removes smells and stains and it doesn’t contain those harmful chemicals that the heavy-duty cleaners contain.

NATURE’S SECRET, IN A BOTTLE

Good for the Environment, Even Better For You!

Oxygen PlusTM, Disinfectant spray cleaner, is completely non-toxic. In fact, solution of hydrogen peroxide 3% has been widely used in food manufacturing, personal care products, and the medical community for over 170 years. You can rest assured that it’s safe to use around adults, children, animals, and fresh produce.

What more can I say than I will always have this in my house. I just love it for everything & so handy in the spray bottle. I totally trust this product.

I use the product to "bleach" my whites - helps with sweat and other stains. Much, much better than the normal bleach which is neither good for the environment and has a strong smell as well.

I haven’t received it yet but will comment when it arrives @nd use it.

Wouldn't be without this sprayer in my kitchen and bathroom cupboards. Quick and easy to use, refreshes and cleans all surfaces brilliantly, plus keeps flies at bay. An added bonus, the spray bottle keeps right on working time and again, unlike most sprayers that clap out after a few squirts.

Excellent product. Love the lavender and peppermint disinfectants. I feel so confident using them on my bench tops and other areas germs etc. are eliminated and can be free from worry about cross contamination.

Got it to treat a stained mattress, worked a treat

I just love this item. I use it to wash all my purchased vegetables and fruit and I also use it for cleaning my bench top surfaces, cupboards etc. I use to use janola to clean my surfaces in the house but Hydrogen peroxide is a much healthier alternative. My favorite cleaning product without the stong ammonia smell

Thank you, I received your product in good order, but have not used it yet. I am sure it will work well. Ina